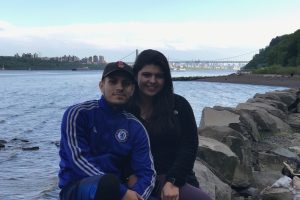 Imagine coming home from work and suddenly being put behind bars for an unknown period of time. On September 20, 2019, DMAE graduate Angie Levia was arrested by the Immigration and Customs Enforcement (ICE) under the same circumstances. Angie has been denied bails and has had several court dates postponed, but fortunately, she is expected to be released this month. Her employer, Monique Villanueva, organized a GoFundMe page to finance Angie’s bills and a potential bail, as well as support her underage brother.

Introduced in 2001, the DREAM Act (Development, Relief, and Education for Alien Minors Act) is a legislative proposal in the U.S. that gives residency status to underage immigrants under specific conditions. In this process, conditional residency is first given, then opportunities for permanent residency are available if certain qualifications are met. Angie was covered by the Dream Act when she was 16 years old, but the Trump administration implemented harsher policies on unnaturalized citizens.

“Dream Act is a very big victory, but unfortunately, it seems what happened to Angie shows we need to do more so that the spirit of the Dream Act is stronger,” art instructor and GoFundMe sponsor Mauricio Rodriguez commented. “Although she was qualified as a Dreamer, she still fell into this unfortunate situation, and it just seems unfair and so harmful for young people, like a betrayal of this agreement with the Dream Act,” Mr. Rodriguez added.

Angie came to the U.S. at the age of three from a Costa Rican and Colombian background. She graduated from the Academies @ Englewood program in 2014, as an excelling student. After high school, Angie contributed to the Englewood community as a TD Bank employee. She has been described by many to be friendly, positive, and full of life.

“I think this is an unjust issue people are forced to deal with because Angie Levia was part of a community in America for practically her whole life. She also worked hard as a student like any other citizen, yet all of that was unfairly taken away from her,” sophomore Julie Jang said.

Angie’s GoFundMe has garnered immense support, but the goal of forty-thousand dollars is yet to be accomplished. It is kindly asked of the DMAE and Englewood community to continue to donate and bring awareness to this horrendous immigration reversal. Angie is eternally grateful and, not surprisingly, emotional over the community’s support through these difficult times.