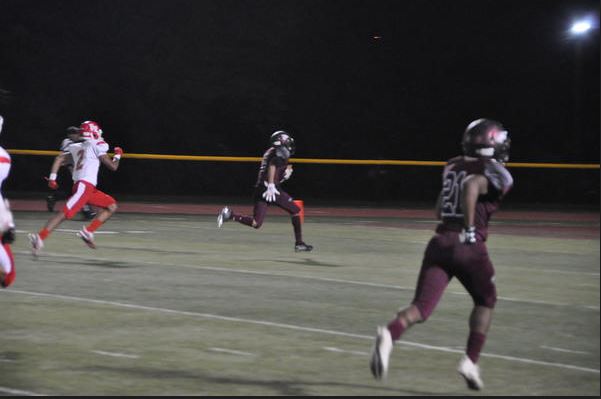 The Dwight Morrow Football team had an excellent start to the 2019 season and hopes to have more wins before it ends. The players came out strong, and though they took a hard loss the first game against Pascack Valley, 12-46, they came back with a well-earned victory against Cliffside Park, 20-19, and then a super Homecoming game win against Ridgefield Park, 26-13.

The homecoming game on October 27, 2019, was a tough fight at first, but the team showed its strength and dedication. Senior Cori Martin made one touchdown and 29 carries, and junior Ryan Fletcher made an astonishing three touchdowns.

“This season has had its ups and downs. We went 2-3 but we can still go far. We just have to show that we can do more, which we can 100% do. These next games will be decided upon by our dedication and focus and I believe we can do it,” senior defensive tackle Hector Lebron said.

The Maroon Raiders are led by three captains this year, senior Hector Lebron, and juniors VeRon Garrison and Jalen Hoyle. Defensive tackle and center VeRon is proud of the team’s growth.

“The season is tough so far but we feel as a team that we are getting better and better as we go on. What we have improved on is playing as one unit,” VeRon said.

One new change to the coaching staff is head coach Joe Hoyle. Previously an assistant on the Raiders’ staff the last three seasons, he moved up to lead the boys.

“We’ve always talked Raider Pride in Englewood. It’s something that has been instilled in me since I was a kid — it’s not just two words that sound good. I want to bring back the winning mentality,” Coach Hoyle said in a North Jersey Record article.

The Raiders are hopeful for two more wins, with the games against Bergenfield and Paramus coming up. Regardless of the outcome, the team stands united with Raider Pride as they represent not only DMHS but also the whole Englewood community.