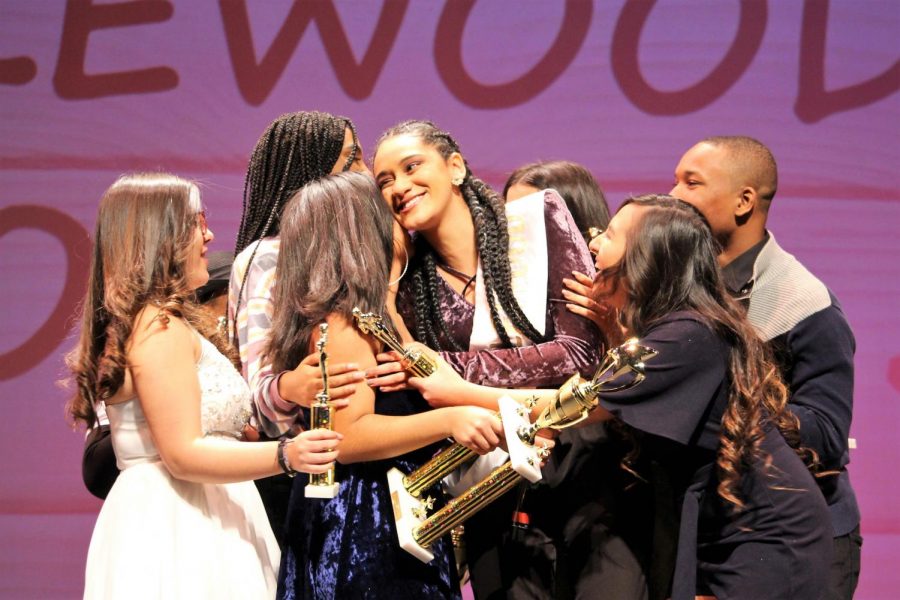 As the seats filled up in the Bergen Performing Arts Centers on January 11, 2018, spectators awaited the annual competition of high school students who sing to compete for the title of Englewood Idol. Emcees Janae Wilson and Ehren Layne opened up the show with witty comments and playful banter. Their enthusiastic and uplifting personalities sparked laughter, cheer, and excitement. Diversity saturated the stage with performers from not only different backgrounds but also different schools, DMAE and Dwight Englewood.

“I really enjoyed getting to know all the idols and my co-emcee. It’s nice to make friends from different schools and towns,” emcee Janae Wilsons said.

There were nine semi-finalist performances who brought heartfelt passion and glamor to the stage, eight females and one male. First up was Maggie Colquitt and then in seamless order Savannah George, Lamyra Newton, Patricia Parker, Donna Gad, Angelica Munoz, Auhjen Upshaw, Genesis Capellan and Lena Graf. The variety in voices and songs was exciting for the audience. The singers chose songs such as “Never Enough,” “Grenade,” “My Heart Will Go On,” “When the Party’s Over” and even a sorrowful French song. Every contestant knew how to use the space on the stage, project their voices and reach the audience.

But the song that captured the night and led to the Idol crown was the one Genesis sang, the contemporary Christian music song “You Say” by Lauren Daigle, which Genesis sang in her own way with stylized vocal breaks and lifts. Her voice filled the theatre and audience members were glued to their seats watching from the first row all the way up to the balcony, where alumni enjoyed a special vantage point.

“Englewood Idol this year has been one of the most entertaining and joyful years I’ve seen yet!” exclaimed Genesis after the show. “The cast, staff, hosts, and video editors were lovely. I’m most proud of the Idol 2019 crew because we were all able to put on such a great show!! And I have extreme love for those who came to the show to support their friends and family!! Just the thought of people having fun during the show warms my heart,” she added breathlessly.

There were many factors behind Englewood Idol’s success in 2019. Producer Judy Aronson enlisted a group of hardworking students to help with every detail of the show. Brianna Christie was the Assistant Producer and Lance Talton was the Musical Director. Cole Rosenthal, Lorenzo Consales, and Brianny Alvarenga worked for weeks on their captivating videos and Sienna Tu created the comical “Baby Shark” video. Kiana Ong and her crew creatively designed the 44-page program. And the Scholarship Fund’s main officers Caleb Kim, Gianna Scarpa and Rebecca Reyes directed the organizational aspects of Idol.

“This year’s Idol was one of our best ever, partly due to some amazing students who worked behind-the-scenes,” Ms. Aronson said. “I was super proud of them. The deep connections between the Idols … left a big impression on everyone too. You could really feel it!” she added.

Ms. Aronson also gave credit to the judges. The judges were Florian Bellanger, DJ Wallah, Josette Diaz and Kia Thornton Miller, and their comments showed how amazed they were by the performances. They commented on each singer’s strengths and sometimes offered insightful advice for singing careers.

Englewood Idol is not only an entertaining communal event, but also the main fundraiser for the Dr. John Grieco Scholarship Fund. The fund annually awards scholarships to DMAE students  amounting to over $24,000. A male and female applicant are chosen from each grade and from each school creating 16 scholarships in total. All the money from Idol goes directly to the Fund and back out to the students who apply for the scholarships. Englewood Idol proved to be another notable event for this school year. Not only were students able to pour out their hearts out through song, but the Grieco Scholarship Fund met its fundraising goals.