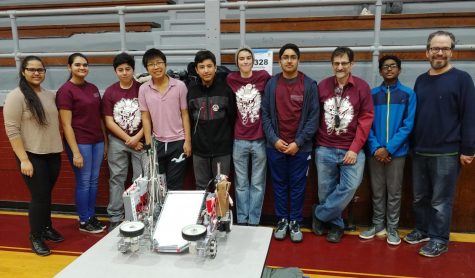 If you think of a squirrel on an exercise wheel, you will have the right mindset for stepping into the TSA Club room prior to competition. This year, Technology Student Association (TSA) members prepared for varied competitions from Animatronics and Technical Problem Solving.

“We had students working in all of these areas,” TSA adviser Randy Sherry explained, pointing to a chart with 36 areas of competitions. “Where the names are filled in next to the subject, kids were preparing,” he added.

However, one TSA group stood out, and on April 14, 2018, these six TSA Club members participated in the 2018 TSA High School State Competition for Video Game Design. The team consisting of juniors Ryan Jeong, Kylie Mena, Tyler Moon, Justin Phillips, Jay Song, and Julia Wojcik, submitted a game called Snoccer, a hybrid of two arcade games. The objective of the game was to score points by having a snake move a soccer ball into the goals, with the snake’s movements being reminiscent of its original arcade game.

“After getting basically nothing done last year, we knew we needed to start simpler this year, so we just combined two arcade games, Pong and Snake, in a way that was simple but also interesting,” Justin said.

Snoccer won second place, securing the club a spot at the national level of the competition. Kylie, Tyler, and Justin will represent the team at nationals in Atlanta, GA, June 22-26.

Another achievement of the DMAE chapter of TSA was co-hosting a qualifier of the FIRST FTC Robotics competition. The competition was co-hosted in conjunction with Dwight Englewood and took place in the gymnasium of the North building on January 20, 2018.

“The competition was a good start to what could be a successful run for the Englewood Robotics Team in the years to some,” freshman Sid Somashekar explained.

The event was overseen by Mr. Sherry and Shawn Cyran as lead coaches for DMAE and Dwight Englewood coaches Marco Pagnotta and Chris Flesiel. Nearly 350 people attended, with 30 teams entering the competition, and the winning teams moving on to the states.

“This year, the FTC team of mostly freshmen built a design similar to a more experienced senior team’s design. The seniors took more than a month to complete it – our freshmen did it in a little less than a week,” Mr. Sherry said.

The DMAE Robotics team, made up of senior Alex Rubino and freshmen Rashel Beltran, Miguel Chica, Karina Nirmal, Richard Sawh, Krisna Panchal, Sebastian Romero, Sid Somashekar, did not win but they enjoyed the chaotic competition and raising money for their club.

“Losing was honestly enlightening,” Sid said. “It showed us where we are and what we need to accomplish to become winners. It taught us how to work together as a team and how to fix errors on the go,” he added.

Plans for next year include simply trying to win more TSA and Robotics competitions.