Silencing Domestic Violence: Speakers Raise Awareness and Tell How to Stop the Violence 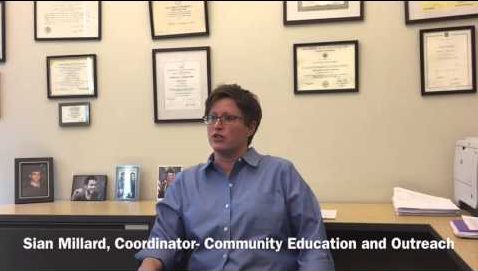 In Bergen County alone, there have been 25 homicides related to domestic violence. Two of them occurred in Englewood, and both of the victims were graduates of Dwight Morrow High School, according to a speaker during the “Alternatives to Domestic Violence” seminar. The serious-faced speaker spoke passionately to students on truths about domestic violence, sexual assault, and dating abuse.

“Everyone deserves a relationship where they will be really respected and trusted, and if you don’t have that, move on,” David Cohen said.

The DMAE library was incredibly silent as students turned toward Mr. Cohen, the director of Alternatives to Domestic Violence (ADV), and Sian Millard, ADV community education and outreach coordinator. Both speakers emphasized that whatever a couple does, there must be a mutual consent, otherwise it should not be tolerated.

The speakers came to Dwight Morrow High School on Thursday,  Oct. 5, 2017. The Zone hosted this event in the library to create awareness for this wide-spread  occurrence of domestic violence because it impacts students and adults in the Englewood community and is misunderstood.

“Domestic violence is all about one person trying to exert power and control on the other,” Ms. Millard said.

Domestic violence is mostly seen through physical abuse, such as punching, slapping, pushing, kicking, and strangulation. Mr. Cohen explained how even playful fighting can quickly go down a dark path in a matter of minutes.

“As soon as the hands come into play, anything can happen,” he said.
Domestic violence also consists of verbal abuse, which can be just as harmful to a partner as physical violence. Being constantly put down weighs heavily on victims and eats away at their self-esteem.

In addition to physical and verbal abuse, the speakers discussed sexual assault and abuse. If at any point a partner refuses a sexual act and is forced to continue, it is considered sexual assault.

“Even if you’ve already been intimate, you need consent, every time,” Ms. Millard said.

Mr. Cohen and Ms. Millard also talked about dating abuse. They warned about sharing intimate pictures with a partner because if you break up with them, there is a high likelihood that they will misuse the pictures and share them publicly.

The seminar also reaffirms efforts on campus by coaches to train athletes about domestic violence and rape awareness.

Over the summer, DMAE fall sport teams went through a week of training on domestic violence awareness.

“Everyone took the topic seriously and nobody took it as a joke because everyone was aware of how many people are affected by domestic violence and rape,” said Matthew Zapata, a member of the varsity soccer team.

The Alternatives to Domestic Violence team left students with an important principle to remember and adhere to in high school and beyond.

“If you lack trust, that is a very big sign that the relationship is going to end badly” Millard concluded.