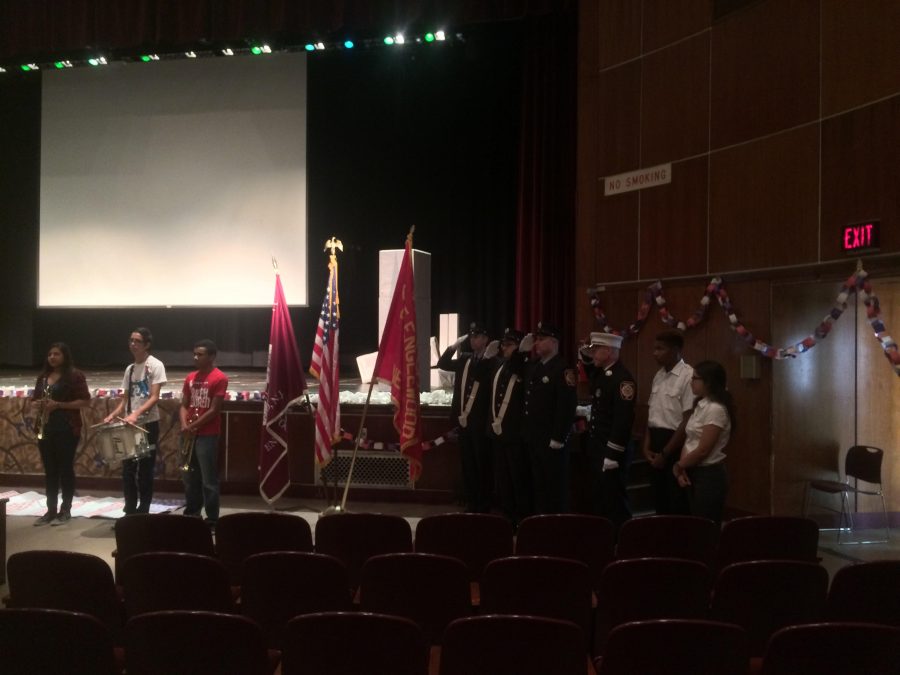 Fifteen years after the devastating attack on one of the nation’s principal cities, DMAE students continue to prioritize the commemoration of the nearly 3,000 lost American lives. On September 12, 2016,  students and faculty came together in the King Hall Auditorium to honor those who died on 9/11.

“I’m really proud of the people on this campus that have made our way of commemorating 9/11 a tradition,” assembly coordinator Judy Aronson said.

With the help of her students in the Diversity Day elective, Ms. Aronson has helped make the 9/11 Assembly possible for the past six years.

“It’s always a little hectic because it is at the start of the school year,” junior Kaya Karibi-Whyte said.
I don’t think people realize how many things change in the moment.
This year, along with juniors Alexis Oliver and Jasmine Brimms, Kaya wrote the script that cemented the assembly segments.

The assembly included the Color Guard, remembrances and a video, but there was a new addition: the time capsule.

“We decided on this because it was the 15th anniversary,” said Ms. Aronson. “We wanted to mark the significant period of time that has taken place since then.”

At the beginning of the assembly, students and teachers were handed a small paper that asked the importance of remembering 9/11. Time was allotted to write, and the commemoration concluded with students  placing their notes in a tin capsule. This capsule will be reopened in 2031, 15 years from this year’s anniversary or 30 years after the attack.

“I don’t think people realize how many things change in the moment,” junior Sue Um said. “The way we view 9/11 will be radically different.”

Some expectations were not met. While many of those in the auditorium fell into silence as the assembly proceeded, some did not give their utmost respect and continued to chatter.

“It’s important to at least be silent because of how much our town and our country were impacted,” Sue said. “Because we are so close, everyone has a 9/11 story.”

Next year Ms. Aronson would like to actively engage students in volunteer service in Englewood. The assembly would be brief, and students would then participate in various service activities.