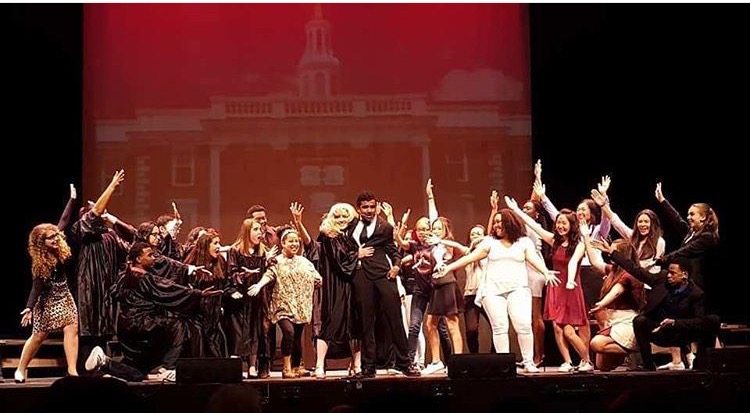 On March 31, 2016, and April 1, 2016, the talented students of DMAE performed Legally Blonde: The Musical on the stage of the Bergen Performing Arts Center. Despite a late start and short production and rehearsal schedule, the show was a complete hit. Audience members clapped, complimented and applauded throughout the show to demonstrate their enthusiasm for the good time they were having and the effort they saw in the performances. After months of hard work, commitment and dedication, the cast of this year’s show continued to demonstrate why having a school musical is such an important school tradition.

“Musical theater is something that a lot of students are interested in, and really passionate about,” musical director Sandy Meltzer said. “Students who might not find their niche anywhere else in school are going to find it on stage as part of the production, whether they’re working backstage or if they’re dancing or singing without any lines. It provides an opportunity fo 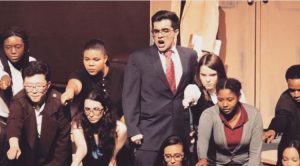 r a lot of individual growth and teamwork,” she added.

The show consisted of two acts with 25 musical numbers, and lasted two hours, with a 15 minute intermission.  Principal Peter Elbert and Assistant Principal Joseph Armental added their talent to the performances as well. They both played the role of Dewey, Paulette the hair dresser’s arrogant ex-boyfriend: Mr. Armental was Dewey on Thursday, and Mr. Elbert played the part in the Friday production. In addition to these cameos, a particularly well-liked musical number was “Gay or European?,” a performance that sophomore Gabriela Tactuk thought was really entertaining and surprising. Others were uplifted by the whole show.

“I honestly thought that it was all amazing, especially with all the props they used and the passion the actors put into their performance,” sophomore Caitlin Russotti said.

Auditions for the play actually began in January rather than December, but even with it being an extremely popular play, only a small group of students tried out. Freshman Zoe Papianni, who had the leading role of “Elle” in the production, was rather surprised she got the main role.

“I was a freshman auditioning for a lead role,” Zoe explained. “When I saw I got the lead, I was not scared, more like anxious for what was going to happen.”

Once the show was cast rehearsals for it had to begin almost immediately.

“A major problem we encountered was the time crunch,” sophomore Kaya- Karibi-Whyte, a member of the ensemble, said. “Rehearsals for the musical started significantly later than expected, so we were on a time crunch from the beginning.” In spite of the time crunch, or maybe because of it, cast members became connected ultimately making for a dynamic performance. 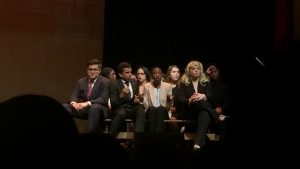 ther, so over the course of nine weeks, I made some really good friends,” he laughed.

On the night before the show went on stage, nerves, excitement, and anxiousness ran amuck. According to sophomore Sue Um, another member of the ensemble, backstage was extremely hot and hectic. Props weren’t in the proper places and some performers also didn’t have their costumes on. Yet, the show went on.

“Before the show, I was horrified. We hadn’t really run the whole show completely and working in Bergen PAC was very different,” ensemble member and sophomore Gisselly Peralta said. There was someone always running around looking for something. In the end,  we got it together though. Everything flowed nicely.”

After the final performance, audiences went home, happy their investment in the Legally Blonde musical had paid off. Members of the cast were as excited as they were relieved that the performance went successfully.

“Just to put in as much effort as we did in that little amount of time and to have the show come out as good as it did was really nice to see,” Zoe reflected. “There’s a lot that goes into the play — especially behind the scenes. But it’s worth it.”

Ms. Meltzer hopes that next year’s musical, should there be one, will be just as good, if not better than this year’s production. The tradition of DMAE musicals, once again, proves to be important to the students not only because of how much fun it is to perform and to watch, but also because of the lessons it teaches everyone.

“Without the dedication, the show doesn’t look the way it’s supposed to look,” Lighting Designer Mindy Rochman said. “Without the commitment, the show wouldn’t happen.”