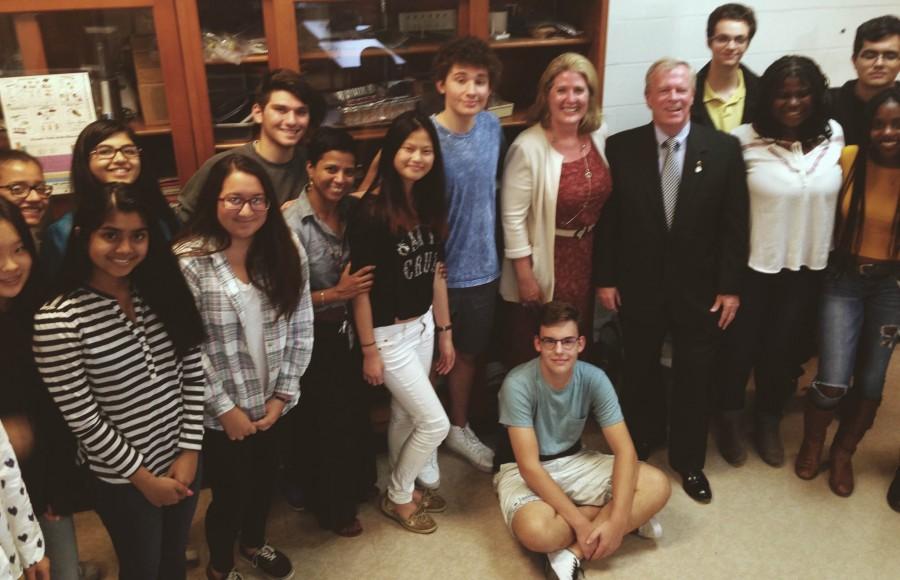 “Naturally, I was excited to have our club’s first guest speakers,” J.S.A. Vice President Melody Magley said with a grin. “But I was most thrilled that the first ones would be Republicans, since many of our JSAers identify as Democrats.”

Melody and Dylan Majsiak, the club’s presidents, contacted the Bergen County Republicans to arrange the visit. With the New Jersey State Assembly election nearing, Kevin Oswald, the campaign coordinator, gladly agreed to have them come speak.

A freeholder, not a “Freeloader” as Candidate Mitchell reminded students, has a broad range of both legislative and executive responsibilities such as handling the adoption of the annual fiscal budget and even regulating county property. An assemblywoman, however, serves as a direct outlet for her constituents by drafting legislation that reflects their concerns.

“It was really interesting getting Assemblywoman Schepisi’s perspective on the supposed Bridgegate ordeal, since it was a headline I earnestly followed,” senior  Sander Miller said.

The members intently listened to the elected officials as they recounted their careers in politics; however, this developing affinity for the speakers did not hamper Paula Giraldo from asking a question about Planned Parenthood, a hot issue between liberals and conservatives.

“What do you think about defunding Planned Parenthood?” asked Paula initiating a few moments of nervous silence.

While it seemed that students expected a biased response, they instead learned that Freeholder Mitchell and Assemblywoman Schepisi are still forming their stance on that topic. They said that their ambivalence stems from the fact that Parenthood does provide important healthcare services to women all over the socioeconomic spectrum. So while the organization has been accused of profiting from performing abortive services, they want to know all of the details prior to solidifying a stance. Freeholder Mitchell told students that he is accustomed to these types of questions, since he “sleeps with the enemy.” His wife is a Democrat.

“The speakers undid some of the popular misconceptions of Republicans,” said club advisor Jacqueline Goolsarran, “Students were able to probe their concerns with two very open and eager Republicans,” she said.

Freeholder Mitchell and Assemblywoman Schepisi reminded DMAE JSAers that, despite the partisan politics in Washington, political ideology is not one size fits all and Republicans are not shrouded in a whimsical sense of despotism as the media may depict. They can be very reasonable people and have some fairly good jokes.