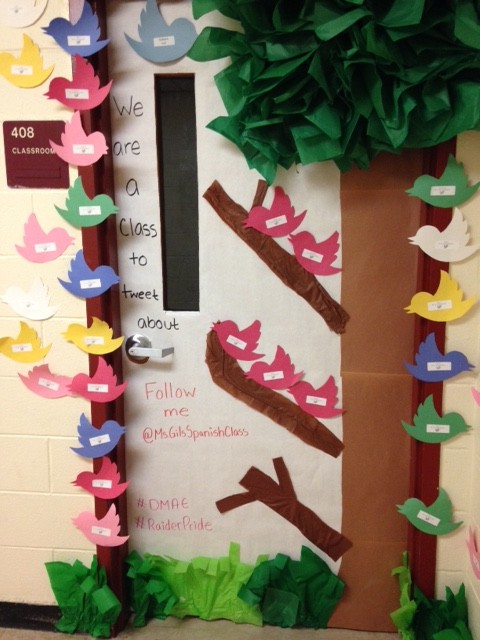 On February 25, 2015, DMAE students participated in a campus-wide Door Decorating Contest in which homerooms competed to see who had the most school spirit. Within 15 minutes, classes had to reflect their year’s work by creatively combining both art and ingenuity, color and a clear message to show pride in their school.. Initiated by the DMAE Raider Pride Team, the contest was launched in an attempt to raise school spirit in a way that all students could participate.

“There weren’t a lot of events that students could participate in,” DMAE Raider Pride Team advisor Grace Brown said. “The students wanted to have a school spirit activity that wasn’t sports or a pep rally,” she added.

The event was approved by Adrian Bickham, chairman of the Raider Pride Team, who gave all credit to Ms. Brown. However, she acknowledged the students’ involvement in the event. Over 150 students participated in the door decorating event as a way to spread school spirit around the campus.

“One of the things I notice on this campus is that when the students put their minds into it, they have the most creative ideas,“ said Ms. Bickham proudly.

According to Ms. Bickham, all the doors were excellent and she marveled at the “campuswide creativity.” The winners of the contest, however, were the doors of Ms. Flores, Ms. Caine, Ms Conte, and Ms. Farley.

Peter Elbert, principal, originally held skepticism when he heard about the event. He said he didn’t think students “would buy into it.” However, once the project was in action, Mr. Elbert changed his opinion.]

“I was pleasantly surprised that high school students were into the competitive spirit of the contest,” Mr. Elbert said.

The judging of the event was done with a genuine rubric by appointed faculty judges. It was clear that students took the time to try to impress the judges of the Raider Pride Team.

“I was really happy and thought that it was great how imaginative kids were to try to beat other doors,” said freshman Nicoletta Consales, designer of Ms. Flores’s door.

It is fair to say that the popularity of the contest has now seemed to have made its place at DMAE as an annual tradition.