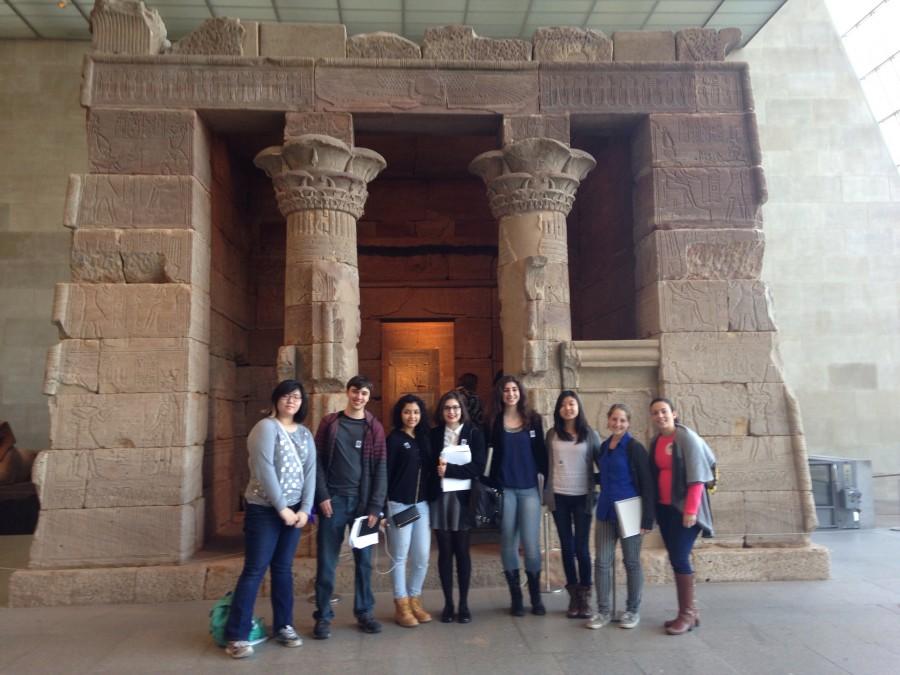 Left, right, even above and below- there is always something new to spot at the Metropolitan Museum of Art. With collections from every continent spanning the beginning of time to the contemporary era, the Met has an endless amount of sights to see, and on January 21, 2015, DMAE students observed this array of paintings, sculptures, textiles, temples, and other pieces of art at the Met.

The students of World History, AP U.S. History, and AP Art History, and their teachers Judy Aronson and Grace Browne, left early and arrived at the MET in less than an hour. The bold Corinthian columns on the face of the museum greeted the students like stoic and guarding soldiers. Both groups began in the student’s center where they received written assignments to guide them through museum discovery.

“The purpose of the trip was for students to gain a deeper understanding of the arts and a deeper respect for seeing them in person as opposed to a photo in a book,” AP Art History teacher Grace Browne said.

Students were obliged to visit exhibits on Europe, the Islamic World, Greek and Rome, Egypt, the Far East, and any bonus site if time permitted. The purpose of the trip was to showcase history through the medium of vital artworks, movements, and structures of certain times. This trip supplemented the studies of historical time periods studied in class.

“We had a chance to take in all we have learned in class and to relate it to the artifacts,” junior Vinita Hazari said. “It really enhanced what we were learning about.”

Asides from finding specific time periods and pieces studied in class, the students also had a little fun with their assignment. They were tasked to sketch at least a few items from each exhibit and even take a “selfie” with their favorites. Through these activities, the students had the chance to focus on certain pieces and gain a better understanding of the subject, materials, and purpose of each. Still, a hoard of high school students with their phones poised to take selfies with pieces of art was bound to turn a few heads.

“I’m the ‘Selfie-Queen,’” said Vinita, “but I have to admit I got shy whenever I got disapproving looks from guards while taking selfies with my favorite pieces,” she added.

The students roamed the museum observing regal European paintings, elegant Roman sculpture, intricate Islamic decorative mosaics, and the relaxing Far East Zen Garden period room. As Vinita described it, the galleries were connected as though one was virtually on a guided tour of the entire world. Many newly created exhibits were also accessible. From the somber, black-crepe draped mannequins in “Death Becomes Her” at the Costume Institute to the colorful, mixed-media geometric patterns of the “Cubism Exhibit,” there was something for everyone to enjoy.

“My favorite exhibit was the Egyptian one because it decorated so accurately,” said Vinita. “It was as though you were actually in Egypt; you forgot where you were.”

Visiting the Met is not only a lesson in artistic style, but also in history and the role art and architecture played in different times. The students’ lessons were strengthened as they could directly see iconic pieces from the periods they studied about in class. The History students observed up front the significant art of certain times and how it was influenced by the events taking place. The AP Art History students saw first-hand actual pieces they studied in class while also being able to see the different styles of certain times.

Giannina Garcia, a junior and AP Art History student, was especially impressed by the “Treasures from India” exhibit. Lavish pieces of jewelry and traditional garments embellished with emeralds, rubies, and other precious stones from as far back as the Mughal Dynasty were showcased.

“I was surprised by how well preserved the pieces were,” Giannina said. “I gained more appreciation for the arts.”

It was easy to spot AP Art History students mimicking the “contrapasto” poses of Greek sculpture, U.S. History students examining posh period rooms of Victorian America, and World History Students taking notes on the artistic and historical significance of the Egyptian Dundur Temple that day at the museum. From the lessons learned in class, the students could appreciate the historical importance of each item they observed while acknowledging their artistic merit.

“The most surprising thing was that a lot of students had already been to the museum and had specific things they wanted to see,” said Ms. Browne earnestly. “I loved that during “free-time” everyone had a clear plan of what they wanted to visit and that students could make distinct opinions about what they saw,” she added.

Like the colors of the Tiffany “Autumn Landscape” stained glass pieces, the students’ classes were brought to life in full through the various artworks doubling as windows of the past.