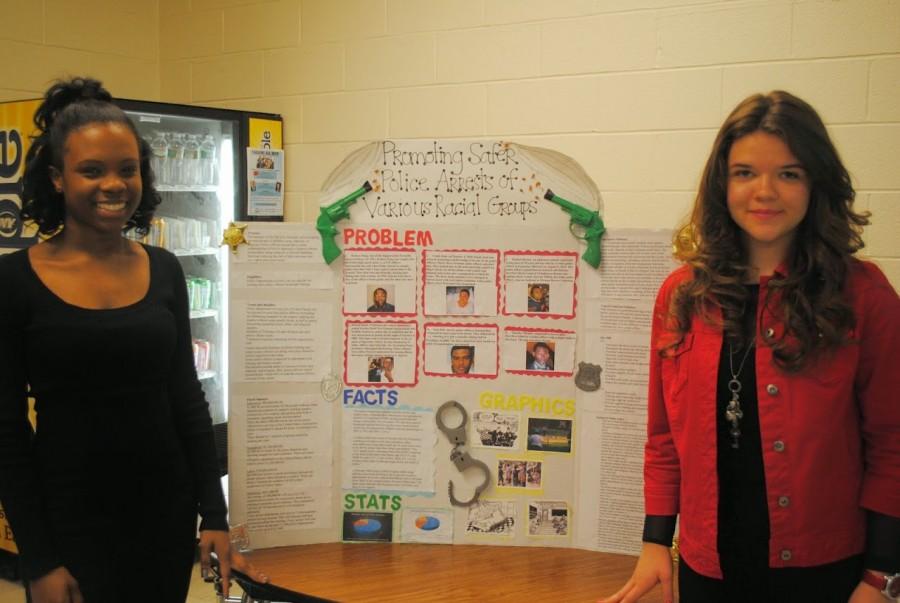 Freshman in the Law and Public Safety (LPS) Academy presented their own bills to fellow students, teachers and even New Jersey government officials during the morning of May 21, 2015, in the very first fair of the LPS Academy. Students wrote legislative bills focused on topics that are controversial and deserve national attention, such as gun control, immigraton, the environment, and more.

The project was assigned in the beginning of the second semester and allowed students to study and understand the legislative process.

Freshmen Ashley Surowiec and Alexis Link worked on a project titled Drugs Gone Bad, which was focused on how the use of lethal injections to execute prisoners is not as effective as it should be. They argued how lethal injections slowly kill prisoners, causing them to suffer making the injection definable as cruel and unusual punishment under the 8th Amendment.

“Our project was different from others because our bill was intended for prisoners while other project bills were intended for regular citizens,” said Ashley. “We were the only group to really go above and beyond and argue for something as crazy and difficult as botched executions. You could say that our project was one of a kind,” she added proudly.

Students were paired up by Roslyn Powell, program manager for the Law Academy, and they created bills through an online program called E-Congress. Schools from across the nation 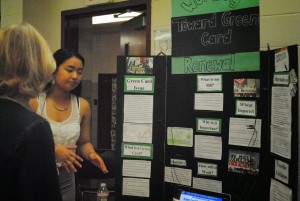 participate in the program so that students can create theses bills and have them reviewed by other students. Similar to how bills are passed in Congress, their bills were reviewed by others in the program and then from this feedback students had to edit their bills and resubmit them until they were complete.  Ultimately, some bill were passed but some were also rejected. From all of this work, Law Academy freshmen then had to create a physical presentation explaining the bill and the process.

Ms, Powell believed the fair would be something new and exciting for her students to try.

“I had done the project before, but not for a Law Fair,” Ms. Powell explained. “This time I thought, ‘Why not?’ It’s something interesting to do.”

Freshmen Soo Um and her partner Eiman Rauf created a bill focused on infrastructure, or the basic structures and facilities needed for citizens to move around in their town, states and country.

“What really stood out about our project was that it was about something that doesn’t get talked about too much by everyday people,” Soo said. “My partner, Eiman, and I created a bill about infrastructure, and many people don’t often think about it, even though we use things like bridges and highways every day.  Also, we had cookies!  That really made us stand out,” said added enthusiastically.

She also noted how the fair was beneficial for her.

“This experience has made me a better presenter and public speaker,” said Soo. “After hours of presenting to various groups of people, I really learned how to talk articulately to people in a confident manner and how to think on my feet when a difficult question was thrown my way.”

Ms. Powell was pleased with her students’ presentations and believed they all gained something from them.

“They learned how to research an issue, identify a problem, look at possible solutions, and evaluate how effective or likely their solutions could be in a real world scenario. It’s kind of difficult to solve a lot of problems. In reality you’d talk about the politics of it, but this is just the idea,” Ms. Powell explained.

Next year Ms. Powell hopes to have a Law Fair that includes the upperclassmen.