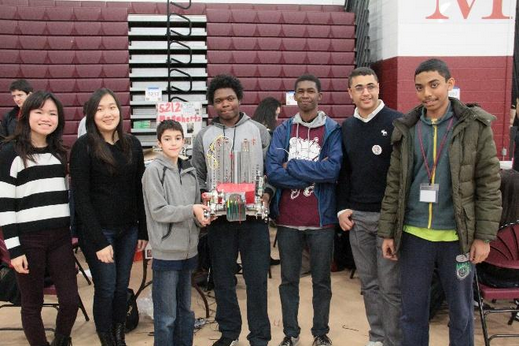 The wires, tools, nuts and bolts all over the DMAE gym that Sunday signified that a Robotics Competition,  the first one ever held at DMAE, was underway. Teams from all over Bergen County, including DMAE robotics team, competed against each other in order to determine who would make the semi-final round.

“We had around 16 teams show up! We had a lot of parents involved and a lot of students show up and getting involved,” exclaimed Shawn Cyran, the co-supervisor for the DMAE team.

The November 30, 2014, event was hosted by For Inspiration and Recognition of Science and Technology (FIRST), which is a non-profit organization with the goals to introduce high school students to the thrill of programing robots, and inspire the younger generation to join the Science and Technology field.  The organization has held many competitions throughout the year, with Sunday’s competition being 1 out of about 30.

Freshmen in particular were highly enthusiastic about the robotics.

“We had to program the robot to travel down a ramp and shoot goals,” freshman Marjan Chowdhury said. “It was difficult at times with the programing bit, especially when it came to the ramp.” 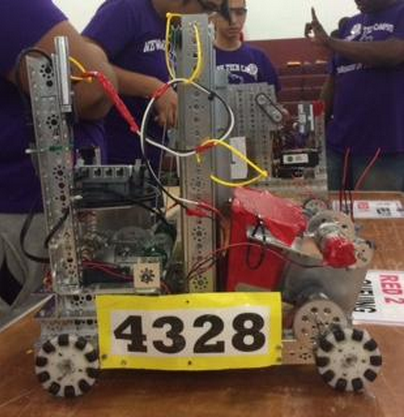 The teams were required to program their robots to endure a series of tasks. Two of the tasks were to travel down a ramp and pick up balls and lift them into tubes, thus scoring the team points. The DMAE robotics team robot had difficulties in doing these tasks and students had reprogram the movements a few times during the competition.

“Many teams, not just our robotics team, had to reprogram their robots during the competition,” said Randy Sherry, the other co-supervisor for the DMAE Robotics Team. “But that was what made it challenging and fun!”

Despite the DMAE robotics team coming in 13th in the competition, the team originally did not plan to participate and were actually wait-listed. Rather, the team expected to only assist in getting the gym ready for the competition and help in the clean up afterwards. However, due to the lack of schools attending the competition because of the Thanksgiving break, the DMAE Robotics Team was added in order to even the odds.

The DMAE robotics team is determined to do even better in the next Robotics Competition. They believe that with diligent work on their robots, meeting weekly from 4-9 p.m. and learning from their mistakes, they will increase their odds for winning.

“Next competition we will do even better,” Marjan said. “We might have lost this round, but next time we’ll come in even stronger!”