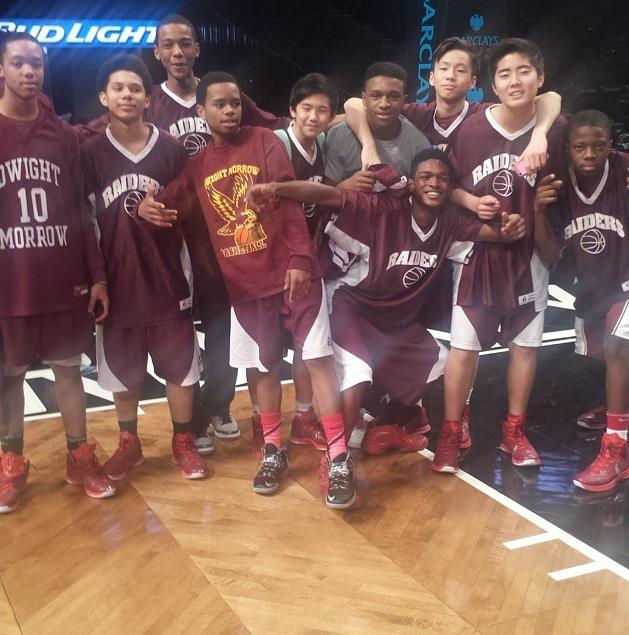 The 2014-2015 Dwight Morrow Basketball Team had an unforgettable day yet again this year: they had the opportunity to play on the court where NBA superstars such as Deron Williams, Joe Johnson, and Brook Lopez play everyday in front of millions of people as their job. They got to play at the  Barclays Center in Brooklyn, NY. And then they stayed to watch the Nets play. A complete sports package.

The Barclays Center  is the new arena where history will continue staging sporting events. Before the Nets moved to Brooklyn they played at the Prudential Center in Newark, NJ, but now from the completion of the Barclays Center the team was able to start fresh again with a new place and new name: the Brooklyn Nets.

“Everything we do is for the team,” Maroon Raiders head varsity coach Ozzie Osbourne said. “Playing and seeing how it is to play at the highest level in your sport is spectacular and overall a great experience for the team. Moments like this are ones that the players will never forget,” add Coach Osbourne.

This was the second year the DMAE basketball team played against the Thunderbirds of Mahwah, NJ, at the Barclays Center in Brooklyn. The game took place on Friday, Jan. 5, 2015, at 3 p.m. under the big lights. The game was quite a thriller with the leads constantly jumping back and forth until the closing moments of the game when the Thunderbirds ending up coming out on top by only three points.

“This was a game we should have won but mistake were made down the stretch that ended up costing the game for us,” explained freshmen Macio Robinson, who hit a clutch deep three-pointer to give DMAE the momentum going into the fourth quarter. “Although the game did not turn out how we wanted it to, playing on the same court where I watch my favorite basketball team, the Brooklyn Nets was … a dream,” Macio added.

He said he and other teammates will never never forget the game and he hopes that DMAE will continue this tradition.

Throughout the entirety of the game, basketball players for the Brooklyn Nets were coming in and out watching the high school game to see the next generation of players. Some Nets players came to work on their jumpers or post moves so they could be loose and ready to go for their game, which was at 7:30 p.m. that night.

“I wondered throughout the game if we would see any Nets players and when they actually showed up I think it got everyone hyped and made the varsity team want to play better,’ said spectator sophomore Nyrie Ferrel. “They were being watched by people who do this for a living at the highest level in the world,” he added.

After the game was over, both school teams went across the street from the arena to enjoy a meal at Applebee’s or Buffalo Wild Wings and shop at nearby stores until the tip-off for the Nets and 76ers Friday Night Game. Unforgettable.