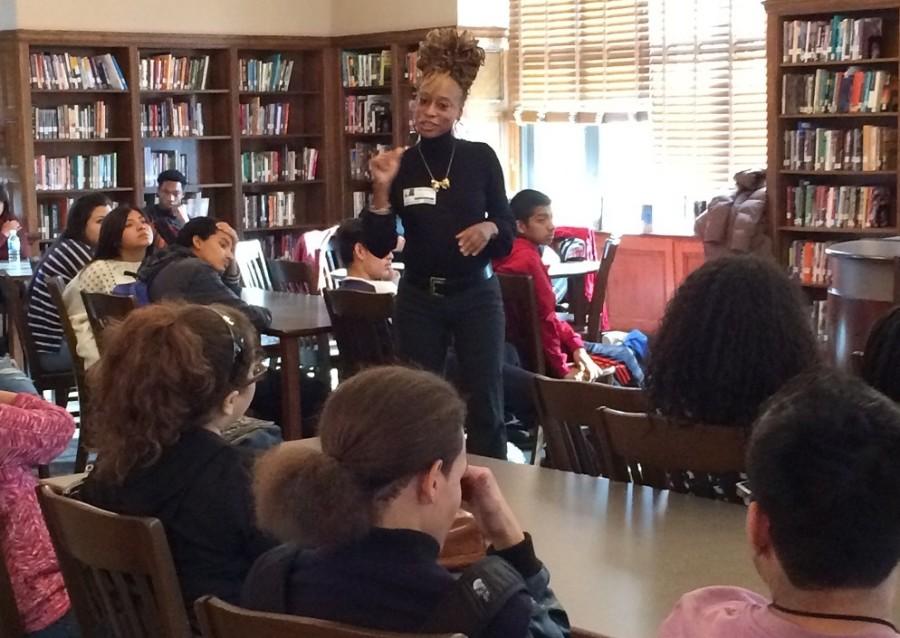 The current generation of adolescents is the highest at risk group for HIV/AIDS. This is why Englewood’s Health Department brought awareness to the topic on Thursday, Dec. 18, 2014, in the library in honor of World AIDS Day.

This presentation was organized by Jhendi Johnny, a Youth Development Specialist and the Teen PEP Advisor at The ZONE in DMAE. She felt that it was important to organize these type of events because, unfortunately, people ages 15-25 have commonly been getting infected with HIV.

She added that hearing from speakers who have experience having unprotected sex and getting affected by AIDS makes it more realistic for the students.

“It’s great to have someone come in and say, hey, you know, protect yourself because you could be me in these shoes. I think students’ immediate reaction is like ‘woah’” she said.

During the presentation, Ms. Donnis, who has worked with youth in Paterson since 1987 dealing with AIDS and public health, did three condom demonstrations to show how easy prevention is. She demonstrated how to put on a male condom, a female condom for penetration, and a female condom for oral sex. Also, the keynote speaker, Tangy Major, who graduated from DMAE in 1984, explained about her personal life experience with HIV/AIDS.

When Ms. Major was in college she got pregnant by mistake. She ended her college career, married the father, and took care of her son. Her son got sick and the night her son died, the whole family tested positive for AIDS. Ms. Major explained how hopeless she felt.

“I was so guilty I didn’t think it could get any worse,” Ms. Major said. “I had faith the size of a mustard seed.”

She explained that one little mistake had made her whole life change for the worse..

“I was so depressed,” she said.

Ms. Major did not understand what else could go wrong until her husband died of AIDS because medical treatments were not available. Now, Ms. Major is married and has a healthy 11 year old daughter. Artificial insemination prevented her from passing on the virus to her daughter, and Miss Tangy takes medicine every day to keep herself healthy. However, she explained that she wants young people to understand the consequences of their actions; one decision can change a life and it’s important to be able to handle the consequences and take full responsibility for them.

Students who saw the presentation, such as Giannina Garcia, a junior, thought it was an influential presentation.

“I think it was beneficial to hear a real life case of how this virus can affect us with just one decision,” Giannina said.

Both Giannina and sophomore Neha Kumrah agreed that Ms. Major’s story and seeing the reality of someone who is living with the virus was very powerful.

“I thought this presentation was very informative,” Neha said. “It taught a lot of useful information that a lot of young people would probably not know.” She added that it is a good cause to raise awareness for because many people are uneducated.

Many attendees, including Neha and Giannina, as well as the Englewood Health Department and Teen Pep representatives, agreed that presentations like this one help younger kids make better decisions about sexual activity and promote education about the consequences they could face.