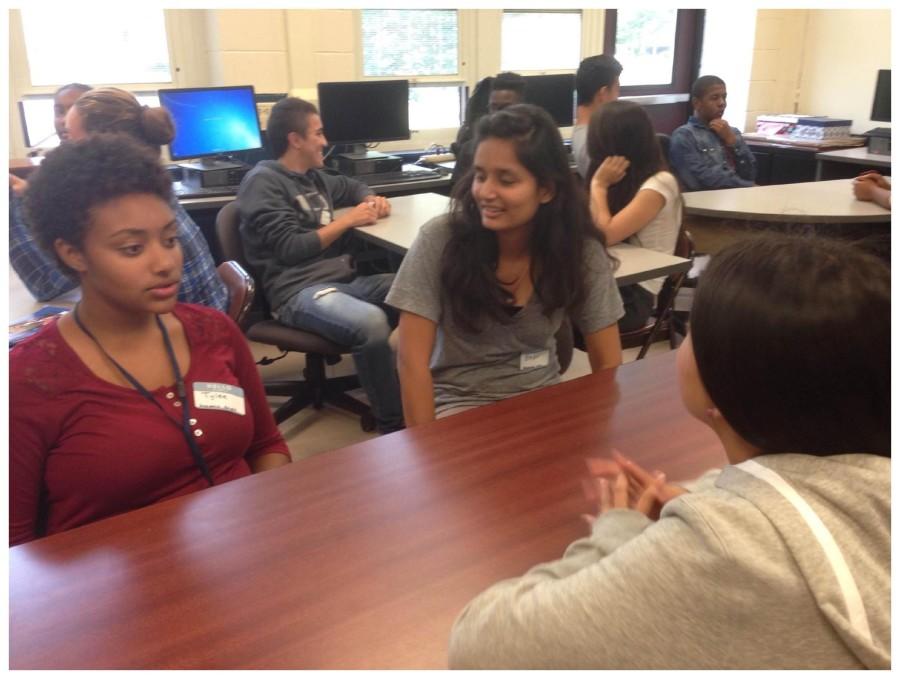 At first sight, this classroom of students looks like an atypical exhibit. On one side of the room, a group of students has notecards with English words taped to their foreheads while, on the other side of the room, another group of students is exuberantly shouting out clues for the words in Spanish. In a couple of minutes, they switch roles and start again, but this time, using Spanish words. It is an interactive process that may look silly in the eyes of an outsider. Yet, this friendly game of Heads Up! is only one of the many activities that the bilingual students of Dwight Morrow and sophomore student of the [email protected] who are enrolled in Spanish collaborate on by participating in Truly Bilingual.

“I cannot speak English very well and I was nervous to speak with native speakers. But they helped me with my English and I helped them with Spanish,” junior Merin Guerra Madrid said.

Started by Dwight Morrow history teacher, Janice Acebo, and Academies’ Spanish teacher, Fina Espinal-Flores, last September, the Truly Bilingual program allows native English speakers from Ms. Flores’ class to converse with Ms. Acebo’s bilingual speakers. It is an opportunity for the students to practice their Spanish or English skills, but for Ms. Acebo, it was also a solution.

“One of the biggest problems we face in the bilingual program is that the students only get to practice speaking English with their teachers,” Ms. Acebo explained. “Most of the students do not know any native English speakers and have little interaction with students outside of their own program.”

They hoped that by launching Truly Bilingual it would not only help students speak languages more fluently, but also build relationships between bilingual and Academy students in DMAE. Still, introducing such a program did not come without initial hesitations.

“It was a little challenging at first,” Ms. Flores said. “This is something that I have not done before and my biggest fear was that the students weren’t going to be receptive.”

Ms. Acebo also added, “Considering how cliquish high school students are, I was worried that the classes would be unwilling to work together, especially considering the language barrier.”

However, the two teachers’ concerns were quickly dismissed. While students were tentative at first, as the monthly visits added up, the benefits of the program began to extend beyond linguistics. Through each new conversation, in Spanish or in English, both the bilingual students and Academy students saw another side of each other.

Merin Guerra Madrid added, “I always thought that the Academy students were smarter than us. Now, I realize that we have a lot more in common than I thought.”

Some relationships became so deeply rooted that students began interacting outside of the classroom for the first time. Phone numbers and social media accounts were exchanged. Suddenly, the bilingual and Academy students were not only classmates, but also friends.

“I text them over the weekends and we help each other out with our homework,” Academy sophomore Elena Kasantsidis said.

With the students’ enthusiasm and cooperation overflowing the classrooms of Ms. Flores and Ms. Acebo during the course of this program, the future of Truly Bilingual is looking brighter than ever. After the successful completion of a recent collaborative research project on U.S. immigration, a topic that was both relevant and personal to many students, Ms. Flores and Ms. Acebo are now hoping to expand the opportunities of Truly Bilingual.

“Right now, we only get to meet once a month,” Ms. Flores explained. “Ms. Acebo and I are looking to increase the time that the students get together.”

As the students’ eager participation further develops, members of the DMAE campus can now anticipate the growth of the relationships that have fostered with Truly Bilingual as well as the program’s potential to involve students whom would have never interacted with each other otherwise.