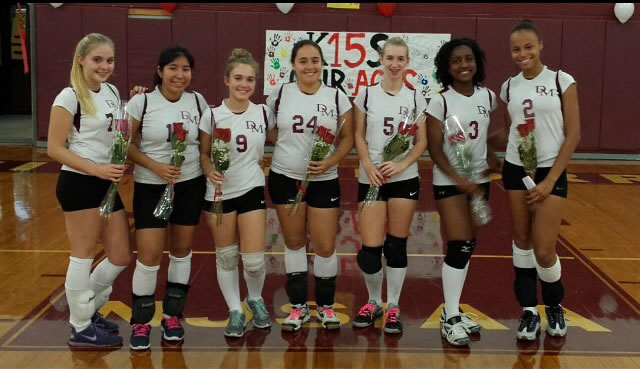 All senior athletes dream to conclude their high school careers knowing they gave their all in order to pull together a successful season. However, no matter how rigorous the efforts or how extensive the trainings, compiling a fruitful season does not always work out.

With all their struggles and misfortunes, this had seemed to be the case for Dwight Morrow’s volleyball Lady Raiders early in the year, but they were able to salvage the rest of the season and produce yet another productive campaign.

As the season boiled down to the last 6 games, the ladies needed to find the spark to get their first win of the year. With persistent leaders on the team, including seniors Amanda Grupa, Alexandra Dul, Nathalie Adams, Jessie Baroni, Yulissa Rojas, Monae Anderson, and Laura Pena, the Lady Raiders were able to push forward and pulled the most out of their teammates.

With a rekindled fire in their game, the Lady Raiders took on the Fort Lee Bridgemen on Oct. 14, 2014. The Ladies won the first set of the game 25-20, but lost the second set 25-19 soon after. With a final set that saw Nathalie Adams get 10 digs, Englewood beat Fort Lee 25-19 to seal the first victory. Freshman Michalina Krol contributed to all three sets with a stellar 16 kills.

“It feels great to get a ‘W’ out here today. We put in so much work and time that it’s truly rewarding to see my teammates faces light up as we take this one home,” an ecstatic Amanda Grupa said. “We are looking forward to getting another.”​

The ladies were soon given another opportunity to win, scheduled to take on the Dumont Huskies on Oct. 25. With the entire school behind their backs, the team set out to upset the highly-favored Huskies.

“We kept on pushing. These group of girls were strong enough to stay together through all the adversity and just focused on playing volleyball,” head coach Javier Pablos said positively.

The first set of their matchup landed in Dumont’s favor with a tight 28-26 score. The crowd, though unsurprised by the result, was visibly uneasy from the closeness of the score. Sure enough, Nathalie Adams had 12 kills during the next set and helped the team win 25-20. In the final set, Jessie Baroni pulled through with 10 digs, and the Raiders closed out a nail-biting 25-23 win.

“I tried my hardest to get this win for the girls. We always play together and try to stay on track,” Baroni said. “At this point I just want to win as many games as we can.”

With this mentality, the Lady Raiders closed out the year with a dynamic season. Though they were unable to win a championship, the girls, along with the entire DMAE campus, were satisfied knowing they gave their best effort every game. Now with key components of the team set to graduate this school year, Dwight Morrow’s volleyball Lady Raiders are looking to the rest of the team to fill in their shoes for another success run next season.