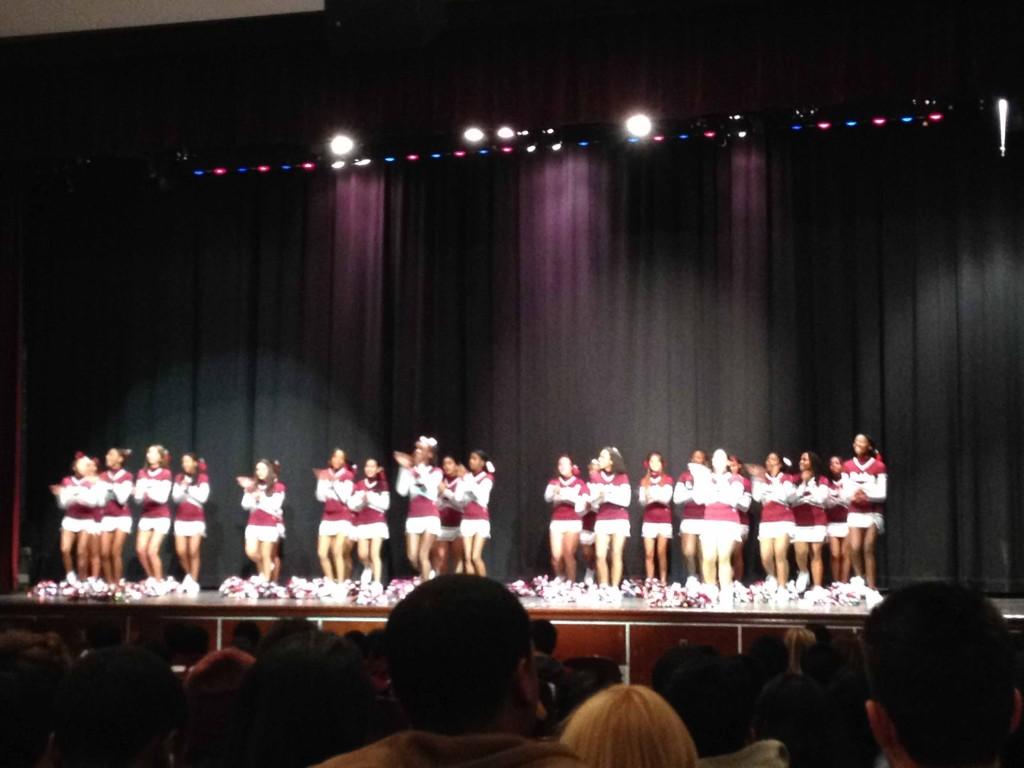 It smelled like hard earned Teen Spirit in the DMAE auditorium, where the school held a Pep Rally to commemorate the determination put in by athletes, cheerleaders and coaches during the Fall 2013 season.

For the first time in three years, the DMAE Pep Rally made a comeback. With the collaboration of new initiatives, students and staff members, the Pep Rally took place on Friday, Nov. 1, 2013 during homecoming week.

“I think that the fact there was a Pep Rally for the first time in three years is an evident sign that our school climate is changing,” senior and Green Dot member Faith Carson said.

The Pep Rally kicked off with the DMAE marching band cheering on the audience with their drums. All fall athletes were then called to the stage and introduced, in accordance to their sport. The seniors were also given special recognition. Sports involved in the 2013 Pep Rally were: the boys and girls soccer team, cross country team, girls’ tennis team, the volleyball team and, of course, the football team.

Seniors Emmanual Daughtry and Dasia Capers hosted the Pep Rally and cheered on the crowd with each successive class. Without a surprise, the class of 2014 was the loudest. Students showed support every time a friend was called to stage by shouting his or her name and applauding.

“As a host, I am very proud of my classmates because not only did I notice good behavior, but also enthusiasm and support,” Dasia affirmed.

The Pep Rally, which was the day before the Homecoming football game, created a lot of anticipation in the gym. During the introduction of the football team, athletes ran down the auditorium aisles, adding to the excitement. After all of the teams were announced it was then time for the announcement of the homecoming court.

This year, instead of nominating a boy and a girl from both DM and AE, there was only one couple per grade. However, for the senior class, Jennifer Pena and Julius Wingate were chosen the Dwight Morrow King and Queen while Jasmine Dennis and Sahil Gandhi were selected Academy King and Queen.

“I appreciated that the tradition remained in the senior class and there were two couples for our grade, since it is the way we’ve always done homecoming,” senior Jasmine Dennis said.

After hearing brief motivational comments by football coach Barry Harris, students were dismissed from the Pep Rally and invited to the Homecoming game against Cliffside Park the following day.

Initially, there was a scheduled Homecoming dance to take place in the North Cafeteria the night of the Pep Rally, but it was cancelled due to low ticket sales.

“I was not planning on going to the Homecoming Game, but after attending a Pep Rally for the first time in high-school, I became spirited and wanted to participate,” junior Veronica Bravo commented.

The homecoming game began at 1:30 and included a performance by the cheerleaders and the marching band. This school year, due to the great size of the cheerleading team, members have been able to incorporate more aggressive gymnastics and risky stunts.

“I’m very proud of my girls and how far we have come,” senior and cheerleading captain Erica Patterson noted. We truly used our great number of cheerleaders to our advantage by changing the routine,” she explained.

The football team managed to secure a spirited victory with a score of 42 to 6 against the Cliffside Park Raiders that secured them a spot in the playoffs for the first time since 2009. There is no doubt that there was a major comeback this homecoming season on behalf of the football team and school community.

“Despite our failure to hold a homecoming dance, I am positive that our school environment is changing,” Principal Peter Elbert commented.