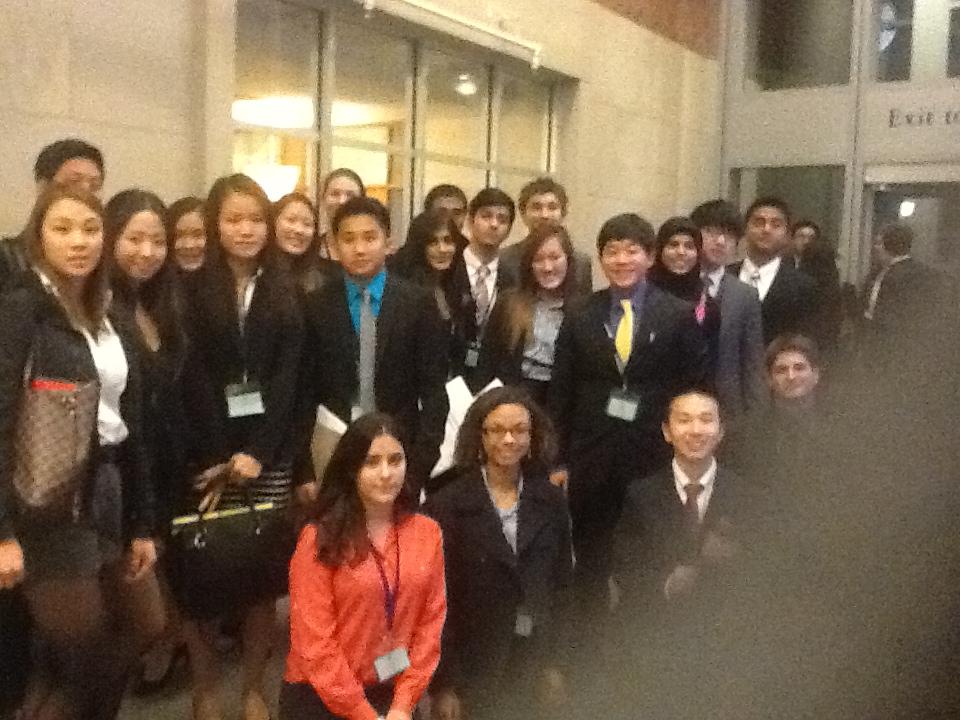 From Friday, Nov.14 to Sunday, Nov.16, 2013, the same weekend that the football team went off to finals, 22 DMAE students attended the 15th annual Model United Nations Conference held at the University of Connecticut in Storrs, Connecticut.

“We like UConn because it is a smaller atmosphere so everyone gets to participate,” said Mindy Rochmann, the Model UN Club advisor.

The results from last year’s conference were positive, with three awards won, but this year’s competition showed tremendous improvement in DMAE’s Model UN team. The team took away 15 awards from the conference.

Junior Jeffrey Xu was awarded the Best Delegate title of the conference. Sophomores Daewon Lee, and Angus Fung, junior Jacob Kholodenko, and senior Elizabeth Spenst were chosen as the Best Delegates in their specific committees.

Those who received an Honorable Mention were sophomores Matt Jon Lee, Amir Moghaddam, Dylan Majsiak, Maya Shvarts, Olivia Rachel, and Bryant Kwai, and senior Parth Shah. Sophomores Samuel Kim and Vinita Hazari were even recognized as the Most Improved delegates.

“I was very proud of them,” said Ms. Rochman. “I didn’t expect so many of our students to place because they were not sure about their performances. I was taken aback by the number of awards they won.”

Many agreed that the highlight of the conference was the speech delivered by Reza Marashi, a research director of the National Iranian Council who also served as a consultant for the U.S. State Department for four years.

“His speech was very inspiring,” Ms. Rochman commented. “He didn’t talk at the students. He spoke to them. His speech had to do with the perception of Iran.”

The conference gave students the opportunity to meet with high school students from different backgrounds and learn about current world issues.

“People were very kind and down to earth. Although it got quite competitive at times, everyone still respected each other and was still supportive,” Angus commented. “Overall, this conference had a great vibe and I am happy that I could be a part of it.”

The UNEP committee dealt with the crises of the growing problem of “Electronic Waste (E-Waste) Management” and  “Anthropological Mercury Emissions.”

“It was a great experience debating with others and coming up with legitimate solutions to the real world crises that were given to us,” Angus said assertively.

Senior Elizabeth Spenst, currently the Secretary General of the Model UN Club, represented France in the Commission on the Status of Women.

Her highlight was winning the Best Delegate Award and being able to “represent our school and team well.”

She also really enjoyed the speakers at the conference. It was interesting for her to learn that “France loves to poke America in the eye diplomatically, like with what happened at the Iran nuclear talks.”

In spite of her ultimate success, Elizabeth faced difficulties trying to negotiate with the other members in her committee. For her, that was the low point, yet it was what made the whole process a good challenge.

“Delegates really wanted to advocate their own country’s position and were unwilling to support a resolution if it did not include their country’s position,” stated Elizabeth. “In other words, people were less willing to make diplomatic concessions.”

Jeffrey Xu, who represented France in the United Nation’s Children Fund (UNICEF) committee, agreed that these conferences are really about making alliances with other countries. He felt that this type of conference allowed him to utilize and improve his problem solving and critical thinking skills.

“The highlight for me was when one delegate brought a ten pound cake to share with everyone in the committee on the last day,” recalled Jeffrey with a smile.

Many students who went on the trip complained about the long bus rides and the committee sessions. There weren’t any rest stops on the three hour ride and the sessions at the conference lasted for six to seven consecutive hours all three days. However, the ultimate result of the conference is proof that the students did take away a great amount of growth from this conference.

The next conference is at the University of Delaware, set for late February. The Club has already begun its preparation.

Ms. Rochman recommends students seriously committed to international relations and debate to take part in the Club, which currently has 68 active members.