Tick Tock: Finals Are Coming Up! 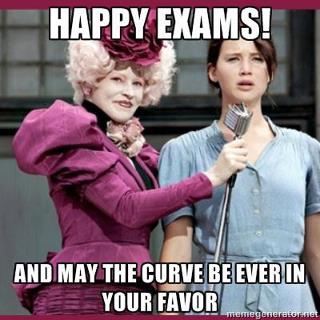 “When I had to first take my finals as a freshman in college, the idea was foreign to me. The closest thing to a final I had was Mr. Cyran’s Anatomy and Physiology exam in my senior year,” Academies @ Englewood alumni Steve Pyun said. “The idea of being tested on what I had learned in the past 14 weeks in college seemed very dreadful to me at that time,” he explained. 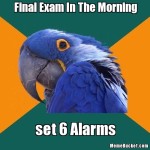 Steve is currently a sophomore at Stony Brook University, and his statement is one of th
e reasons why DMAE school administrators and faculty reached a consensus to give final exams again. Students like Steve provided the feedback that exams are needed to better prepare future college students for finals week in terms of practice and preparation.

Teachers have been busy preparing these exams which will be administered June 17-20, 2013, with make-up exams on June 21.

“It provides an opportunity for teachers who teach the same subject to actually agree upon the main ideas that need to be captured, regardless of who is teaching the course,” Supervisor Gordana Picinich noted. “The exam defines the specificity of the course. So, whether you have Teacher A or Teacher B, the final exam is going to be the same and this ensures that the coverage of the material is comparable,” supervisor Gordana Picinich stated.

Yet, many students from all grade levels have been complaining about the unfairness of this new policy. 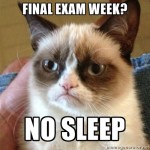 “The final exams are really unnecessary,” according to freshman Dylan Majsiak, who also feels that “the school did a really poor job of informing us and giving us the time to prepare.”

Students like Dylan felt they were not informed soon enough, although teachers were aware that there would be a final exam administered in core courses early in the school year.

Junior students also have a litany of complaints.

“It is going to be a lot of stress with the AP testing, SATs, and now Final Exams. There is also the end-of-the-year projects we have to worry about. For juniors, it is going to be unreasonably exhausting,” junior Melissa Chan stated.

However, teachers believe that the finals would be a good experience for students, as it would be an excellent way to prepare them for the pressure of more competitive college entrance as well as career readiness. 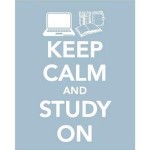 “I believe the benefits of taking the final exams outweigh the negatives” history teacher John Cirilli said. “While students love not taking them, it will prepare them for college in terms of organization, study groups and being in a pressured environment for two hours. By doing so, this will increase their success in college,” Mr. Cirilli explained.

Contrary to many students, some, like junior Akinshola Iogunleko, think that the finals are going to be “light work.”

“I support the final exams. I come from a Catholic School and I have been doing them since first grade. It is light work. Bada bing bada boom. We’re done!” Akinshola said with confidence. “The finals will help since all we do in college is take tests and do research papers.”

As a senior privilege, some seniors have a leeway: those with an A (90 or higher) in a class are eligible to be exempt from final exams.

Senior Theresa Ambulo claims she will be exempt from a few exams. 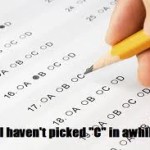 “I think the policy has good intentions but gets kind of confusing. Although I have no opposition to it, I feel that it is contradictory since the whole point is to prepare students for college, yet seniors can be excused from them,” Theresa stated.

Despite the benefits the final exams can have, sophomore Stephen Park feels that they can yield more negative results. Stephen feels this way because he thinks some of his teachers have failed to prepare him and classmates for finals that can either make or break their grades.

The maximum percentage the finals count for a student’s grade is 10% overall.

“I think that we need to be careful about how much weight we give to the finals. We don’t want students who are doing well throughout the year to have their grades negatively impacted by the finals,” mathematics teacher Dorothy McClelland stated. 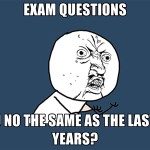 “I know it is pressured time to study for exams,” Ms. Picinich acknowledged. “It is part of the academic journey to deal with the pressure, to deal with the time element and to deal with the comprehensive overview of the subject you have been studying the whole year. But, I think there are a lot of merits through going through the journey,” she said.