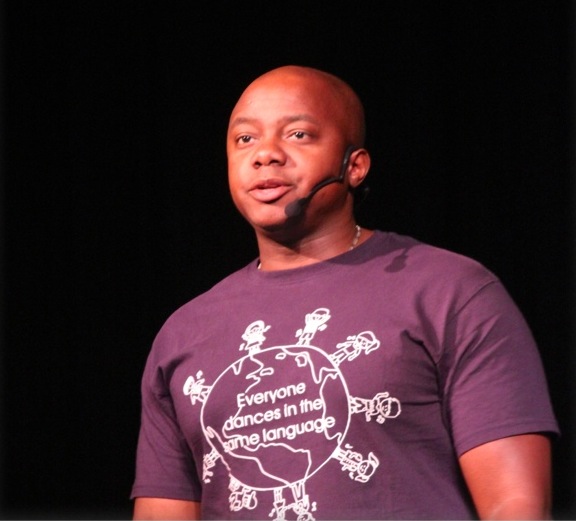 Michael Fowlin, better known as “Dr. Mykee,” visited the Dizzy Gillespie auditorium on Friday, April 26, 2013, and gave a dynamic performance to students. Sophomores, juniors and seniors witnessed a combination of comedy and the hurtful truth as the result of Fowlin’s classic “You Don’t Know Me Until You Know Me” performance that addressed issues of race, discrimination, violence prevention and personal identity.

“It was very eye-opening to hear how cruel and cold hearted we can be to one another,” junior Natalie Saldarriaga commented.

“It was really cool when he acted out the different people because every person in the audience could have related to at least one of the characters in some way, shape or form. He openly addressed typically under-discussed issues and that helped people in the audience connect with him,” senior Katarina Cruz pointed out.

Mr. Fowlin visited the DMAE campus after senior Jay Locquiao heard about the performance back at his middle at Rochelle Park. He mentioned the idea of bringing him in to social studies teacher, Judy Aronson.

“Once Jay told me about Michael Fowlin’s mission, I knew we had to invite him to our school,” Ms. Aronson said.

The message of Mr. Fowlin’s performance featured the importance of recognizing both individual beauty and the beauty of others. His goal was to celebrate individuality within the unity of one community.

“Michael Fowlin left our school with profound life lessons that can serve us well. His message, I hope, will resonate with the kids for a long time. He did his job as a motivational speaker, but now it’s the students’ job to utilize what they learned. Only then, can we judge how impactful he was,” senior Jay Loquiao said.