A Night to Express Yourself 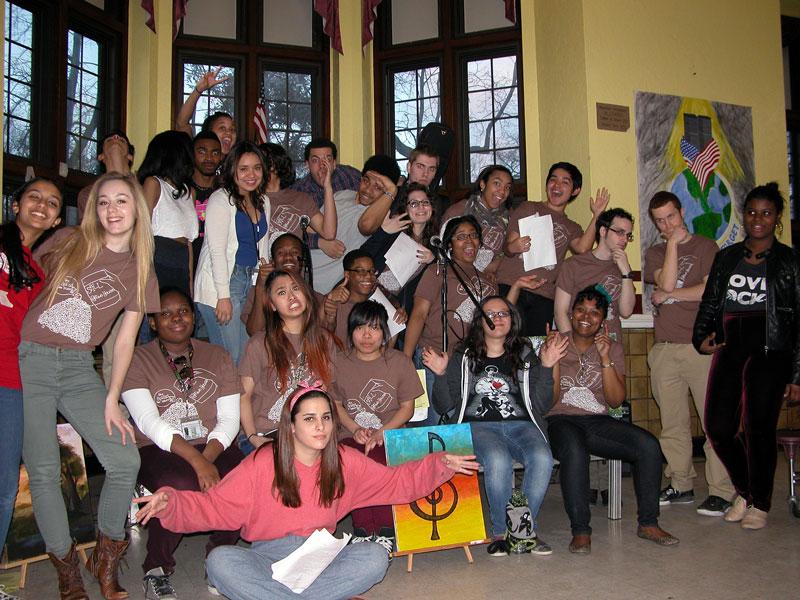 Over 150 people crowded the doors to tune into the 7th Annual Spill Coffee House event, which took place on Friday, March 22. The loud and active atmosphere certainly foreshadowed a night full of excitement and talent.

Students, teachers, and family members experienced original literary works performed by DMAE students. Over 20 students from various grades performed and presented pieces of poetry, artwork and music to the large crowd. The show opened up with two comical poems “Hi Quan” and “Ms. Deodor” by Senior Quan Graham, which were met with smiles and chuckles. These pieces set the tone for what would turn out to be a splendid night. 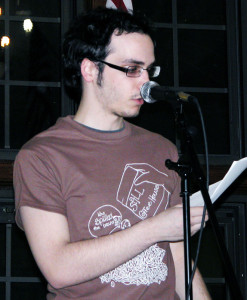 “What I found most exciting about the Coffee House, going back to my earliest involvement in the event, was its emphasis on promoting student creativity through the written word,” senior Michael Abolafia, Spill Club member and performer said. “This event was a celebration of DMAE’s diversity and testament to the student body’s literary excellence.”

Upon entering the DMAE North Cafeteria at 7:00 p.m., every guest got the opportunity to settle down and enjoy some of the baked goods and refreshments sold. Many socialized, while others wandered around taking note of the fine student artworks on display. By the time the show got started, all eyes were fixed on the hosts: seniors Alexis Ivory-Paige and Anisa Ellis-Smith. Their combination of energy, enthusiasm, and humor was perfect for the event to run smoothly.

“The atmosphere was great. The best part of the Coffee House was seeing the creativity and the work of the students at the DMAE campus. It truly highlighted the amazing talents we have here, and I feel like the event brought everyone together,” freshman performer Julia Kotaev said. 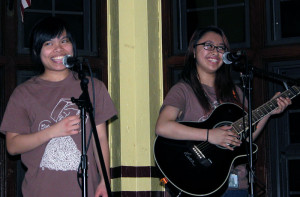 During the intermission, guests were eager for additional refreshments and food. In a matter of 10 minutes, nearly everything sold out. When the show resumed, the audience enjoyed a duet performed by sophomores Zeline Lacap and Melanie Sunga. Julian Faust finished off the night by reading two impressive pieces “Heartz of Men” and “There Won’t Be a Wedding” that got the crowd roaring with applause.

“The Spill Coffee House was something completely new to me,” freshman Dylan Majsiak commented. “As a freshman, I was never exposed to a ‘Poetry Slam’ kind of event previously. I loved hearing the varying pieces of writing, and it was interesting hearing pieces from people whom you wouldn’t normally expect to be into poetry/writing. All in all, I really enjoyed the coffee house and plan to attend next year!”

Despite having to take place later in the year than usual, the Spill Coffee House turned out to be a success. The industrious literary club managed to raise over $900, which will go towards publishing the Spill Literary Magazine.

“Having such a great turnout to support us and recognize the literary and artistic work of our students is a very significant part of this experience,” Alison Fordice, advisor of the Spill Literary Magazine noted. “It was gratifying to see that many people came out to be a part of the event.”

The Coffee House is important because it gives creative students the opportunity to share their original works in a public setting. According to Ms. Fordice, such students often have no other way to shine.

“Often these are the students who aren’t publicly acknowledged in other ways. They’re not out on a field with fans cheering them on, so having the Coffee House and publishing Spill each year provides them with the recognition and encouragement they deserve,” Ms. Fordice explained.

Perhaps one could even say that the event was enlightening. Be sure to check out the Spill Literary Magazine, which is set to be released mid-June.