Medals and Melodies at HOSA Regionals 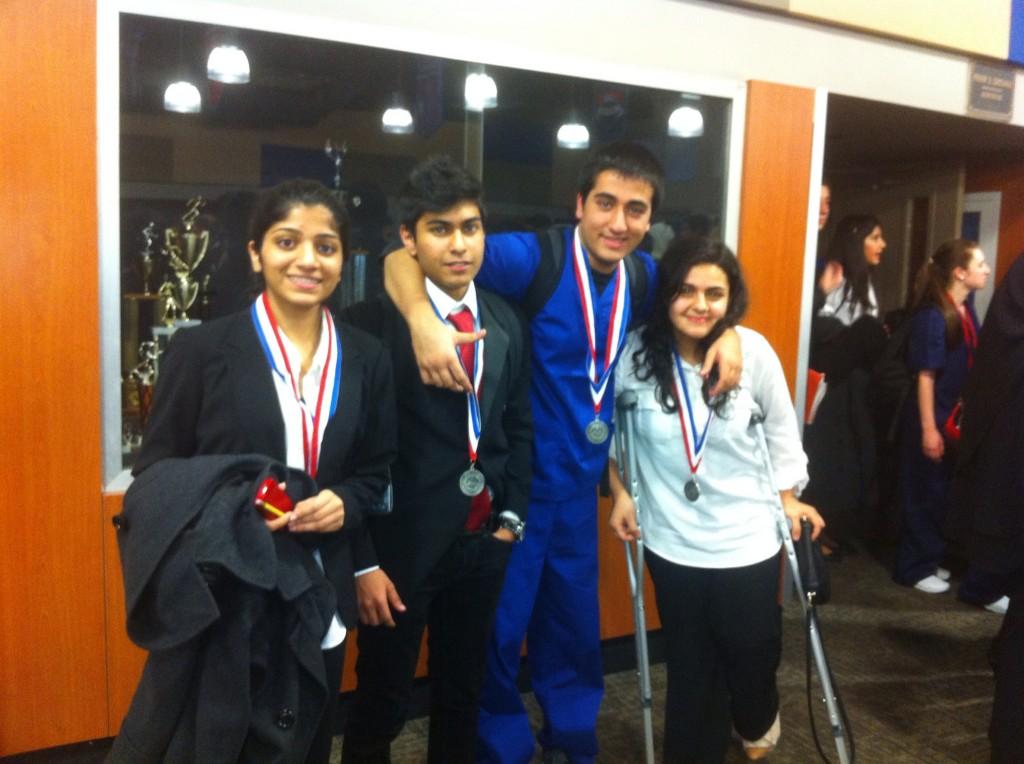 A row of cars, heaters on full blast, lined the circular driveway in front of the Dizzy Gillespie Auditorium early on the morning of the competition. Anxious students waited inside the warm cars passing the time with a parent. A handful of other students huddled together in the freezing temperatures in front of the auditorium, impatiently awaiting the buses that would not only take them to the annual HOSA Future Health Professionals Northern Regional Conference, but also keep them warm.

A record-breaking 83 students attended the Regional Conference on January, 12, 2013, with new advisors Jackie Goolsarran and Moheb Mechail accompanying the large group. And they won a record-breaking 27 medals as contestants who placed in the top eight for each category of competition.

The average number of students who attended the conferences in previous years was 40, making the number this year more than twice as many. New Jersey State Vice President and [email protected] Chapter President, senior Jazmine Platon, was overwhelmed at the amount of enthusiasm there was for HOSA this year.

“I was totally caught off-guard when all these people started coming up to me to ask how they could join HOSA,” said Jazmine. “I was so excited because this meant HOSA would not be disappearing and, of course, now there would be a chance for more medals.”

The conference was held at Passaic County Technical Vocational High School in Wayne, New Jersey from 8:00 am to approximately 4:00 pm. Schools from all over northern New Jersey attended the conference, including the Bergen County Academies and Hudson County Vocational Technical School. The competition was held all morning and into the afternoon. The variety of events was tremendous, from Dental Spelling and CPR/First Aid, to Researched Persuasive Speaking and Extemporaneous Health Poster.

When the competition ended, HOSA members assembled in the auditorium where they heard two speakers. First, they were introduced to Conor Reid, a 17 year old who has cystic fibrosis, the disease that national HOSA is working to help cure by donating to the Cystic Fibrosis Foundation. Next they heard speaker Donna Davis, who told her story of survival. Ms. Davis is an instructor in the Academy of Medical Arts at Passaic County Technical Vocational High School who survived a near death experience when she suffered from a heart attack.

“I thought the speakers, especially Conor, were inspirational,” said sophomore Soomin Lee. “Conor was able to teach me that even with cystic fibrosis, you could still be optimistic about life”

While the judges were tallying up the scores for the competitions, HOSA members played a crazy game of Don’t Forget the Lyrics. Members ran up to the stage to sing along to the most famous and notorious songs of today. The stage filled with 30 people at at time huddling over two microphones. Some Academies members joined the fun, singing to “As Long As You Love Me” by Justin Bieber and dancing to “Gangnam Style.” Even Ms. Goolsarran joined in and sang to “Call Me Maybe” by Carly Rae Jepson.

“The Don’t Forget the Lyrics game was really fun,” Mr. Mechail said. “I think it broke down the cycle of competition a little bit and I really enjoyed the singing and the music.”

The Awards Ceremony was just as lively as the karaoke with all schools cheering for their winners. It was hard work cheering for the 27 [email protected] HOSA members who placed in their competitions. But as each student was called up, the amount of enthusiastic noise from the Academies section of the auditorium remained ear-shattering.

“Everyone was so supportive of each other and our school came together as one,” senior Ami Shah said. “We didn’t just cheer for our friends we cheered for everyone, even people we didn’t know or met before.”

It was truly a victorious moment for the Academies @ Englewood when 85 triumphant faces left the conference. No one could have been more proud than Mr. Mechail.

“Mr. Mechail and I were extremely proud because we were both anxious, being our first time at a conference, and we felt that we hadn’t worked with the group long enough to prepare them,” Ms. Goolsarran said. “We didn’t know what the competitions were like so we were proud, not for ourselves, but for the kids because they had studied independently and worked hard. To walk away with double the amount of medals from last year was really impressive.”

As the Regional Conference came to a close, members immediately started thinking about the State Conference in March. Those who placed in the top 5 in their competition will go on to compete in states, while other members could still compete in group competitions.

Congratulations to the 27 medal winners: