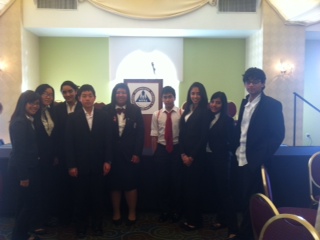 “HOSA, HOSA, HOSA” is a familiar refrain of DMAE morning announcements, a catch phrase thought up by Clare Kennedy, the former advisor of the organization that is now known as HOSA Future Health Professionals. Ms. Kennedy had been the advisor of HOSA since a chapter was first started at DMAE and no one was more surprised and worried about Ms. Kennedy’s absence this school year than HOSA chapter president and New Jersey northern regional vice president, Jazmine Platon.

“I was afraid we wouldn’t have a HOSA club this year; it seemed impossible,” Jazmine said. “We no longer had an advisor, nothing was being approved by the Board of Education, and we had lost all of the money we raised last year, almost $400. There is only so much that we students could do on our own; we needed a teacher.”

Indeed it seemed as if HOSA was going to be no more until biology teacher Jackie Goolsarran and physics teacher Moheb Mechail stepped up to the plate.

“I saw how much the kids value HOSA and I was afraid that with the absence of the previous advisor the program might fall,” Mr. Mechail said. “With the help of Ms. Goolsarran, too, I thought we can keep HOSA alive.”

Being an advisor for an organization such as HOSA is not an easy job. HOSA is an organization in which schools across the country compete against each other in medically-related competitions. As advisors, Ms. Goolsarran  and Mr. Mechail have keep track of more than 60 members, making sure everyone has registered, picked competition areas, paid fees and dues, and been given in permission slips.. In addition, the new advisors had to deal with larger issues, such as getting competition dates approved by the school administration and scheduling buses to take students to and from the events. However, a great deal of the work is effectively distributed among the members of the DMAE Chapter.

“By becoming a co-advisor I thought I would be doing a lot of work that I am unfamiliar with,” Ms. Goolsarran said. “But I find that the HOSA council, the students, take care of most of the responsibilities and help Mr. Mechail and me get used to how things go. I was not expecting such a dedicated and enthusiastic group of students,” she said.

With the help of Ms. Goolsarran and Mr. Mechail, HOSA has been running smoothly and efficiently. For some students who had been part of the organization before, it felt as if nothing had changed.

“Everything seems organized,” junior Ridwan Sharkar said. “I don’t think it would be any different if our previous advisor was here.”

Things have been going as planned. So far the HOSA council, the group of students who have taken leadership roles the DMAE chapter, attended the Fall Leadership Conference in early November. HOSA members collected school supplies for the schools in Moonachie, a town in New Jersey that was severely damaged by Hurricane Sandy. But this is not all that HOSA is planning to do this year in addition to its competitions.

“Every year the national HOSA organization raises money for a foundation that helps to find cures for serious diseases,” Jazmine said. “Our chapter has never done anything outside of competing and I want that to change. This year we’re going to be raising money for Cystic Fibrosis research and be supporting it by doing a Cystic Fibrosis walk in May.”

For both the advisors, the goal is to not only help with the fundraising but to also become more knowledgeable about the organization itself and become more accustomed to the routine of things and experience what it means to be a part of HOSA.

Thus far, the DMAE HOSA Chapter has everything under control despite the seemingly adverse environment at first. Jazmine is happy to have two advisors and hopes the Chapter will continue on its path of accomplishments with even more medals and successful fundraisers.